Speech processing on real time operating systems (RTOS) more often than not require estimates of the direction of arrival (DOA). Due the the time and computation constraints on RTOS platforms, most sophisticated algorithms are impractical. Thus, instead of MUSIC like algorithms for estimating the DOAs, time difference of arrival algorithms are leveraged to give reasonable estimates for most applications. The topology of the microphone array has to also be taken into consideration. A linear array is unable to distinguish signals from the front or the back due to spatial ambiguity. Thus a minimum of three non co-linear microphones are required to have a full view in two dimensions. In a three dimensional plane, a minimum of four non co-planar microphones will be required. In most applications a two dimensional resolution of the DOA suffices.

microphones and suppose it is desired to estimate the DOA. This is depicted in Figure 1 below: The signal at each microphone obeys:

is the delay from the source. Its is easy to verify that the time difference of arrivals (TDOA) of the horizontal array will obey:

while the vertical array will obey:

is as shown on Figure 1 and

is the DOA with respect to the ordinate. We could also use the TDOA between horizontal array and vertical array depending on the computational resources available. For

unique tuples from which the TDOA can be estimated. Using only the vertical and horizontal arrays will result in a reduction to

unique tuples. This will lead to a system of equations given as: 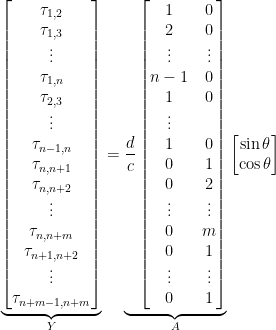 Then the least squares solution becomes

It should be noted that

can be computed once and then only

additions and multiplications are required to estimated

The choice of sampling Frequency and/or

, together with the number of microphones can be used to determine the resolution of the returned DOA. It should be noted that we could use a square topology but that will not provide extra information but only reinforce the given estimates by removing noise from the estimates. In the noise free case, the extra half topology from the square configuration provides no extra information for estimation.